Who and when started using spices in the East after all this time can’t be claimed for sure. As you know, water with laurel leaf and cumin can be considered as a soup and if a handful of millet is added there, it becomes royal dinner…  In the East, the poorest man could boast that he seasons food with precious spices as the richest people in Europe.

Caravans walking along the Great Silk Road brought almost all spices to our land from South-East Asia. Bags full of pepper were getting more expensive with each farsang and in destination site, they could have cost as a whole bag of precious gems.

Nowadays spices are available for all Europeans and Asians as transportation costs have decreased considerably. Due to mass cultivation spices have lost their secret – “as good as gold”. Thou, if calculated relative to a kilogram, a small sachet of spices is not cheap at all.

It is impossible to imagine a dish without spices in Uzbekistan. Each dish requires the use of a specific and time-tested set of spices. Each spice used inappropriately or too much can spoil the taste. It is only Russian proverb says that porridge cannot be spoiled with butter, while Uzbek porridge mashkichiri needs attentive use of spices, not mentioning the king of all dishes – pilaf.

Queen of all spices in Uzbekistan is jeera. Its rich aroma and taste can be found in many dishes of Uzbek cuisine. It is a natural preserving agent which can keep meeting fresh in hot weather.

Barberry is a medicinal spice, an antidote. It gives a slightly sour taste to soups and meat dishes.

There are several types of red hot pepper in Uzbekistan. It is used fresh and dried.

Fragrant black pepper is an essential component of fresh salad.

Coriander – seeds of cilantro – is a vital part in marinade preparation. 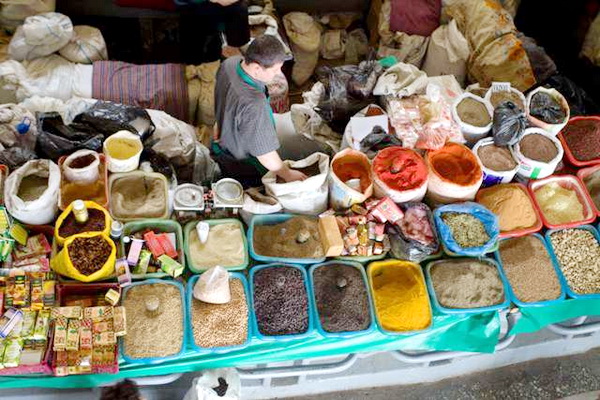 Wild fennel – oil which according to Hadith “cures all illnesses except for death” – decorates lepyoshkas (wheat-flour tortilla) and gives them amazing aroma.

Crocus – weightless ligulas of flowers which are picked up manually and sold in grams – is the only spice which can still be considered as precious as gold.

Spices can be found at any bazaar in Tashkent, yet the largest assortment is found at Eski Juva,  Chorsu Bazaar.

On the second floor under a huge dome, there are countless stands with spices from different regions of Uzbekistan, India, China, and Emirates.

Everything can be found here – there is hardly a spice which cannot be bought at Eski Juva. Even if it is not available at the moment, it will be found and brought especially for you.

It is a great pleasure to walk around the bazaar and look at colorful piles of different fragrance, ask for their names, listen to stories about spices, and of course buy small sachets of everything.

So that back home open small sachet with jeera, enjoy the aroma and remember Uzbekistan.