HOW IS MAY 9 CELEBRATED IN UZBEKISTAN?

May 9 - the celebration of Memory and Honor Day in Uzbekistan is a Day, dedicated to the World War II heroes. The memory of the feats of our brave and generous people unite all the 34 million and multinational Uzbekistan population with a common sense of pride and gratitude.

War II ended 75 years ago, but time has no power over the immortal memory of people who saved the world from fascism – a threat that rebelled against the inviolable values of humanity: freedom, the right to life, and equality.

To make sure of this, a year ago it was enough to come to the Eternal Flame and the monument of the Grieving Mother in Tashkent, which is located on the main capital square – Mustaqillik Maydoni, or to the memorial complex "Mass graves". Thousands of Tashkent residents and capital guests, government representatives, and diplomatic missions visited these monuments to lay flowers and honor the memory of the fallen.

In the evening, the Friendship of Peoples square could hardly accommodate the number of people who wanted to enjoy the fireworks. The fire extravaganza has become an annual tradition, directing the eyes to the night sky at exactly 21: 00.

2020 and the coronavirus epidemic made adjustments but did not break the celebration format. Even in such conditions, there is a special atmosphere everywhere. Diligently observing the quarantine, Tashkent residents were not able to visit the monuments of Memory, and the fireworks were observed from the windows of nearby houses and broadcast on the Internet.

The "Immortal regiment" campaign, which is popular in Russia has been warmly supported by Uzbekistan residents for several years, was held online too. More than 2 million people expressed their gratitude to the winners in spirit and at the call of their hearts.

On the map of Tashkent on this significant day and the great anniversary date, a new attraction appeared – "Victory Park". Mass events are not allowed in quarantine, so only officials participated in the opening ceremony – President Shavkat Mirziyoyev, government members and the diplomatic corps of the Russian Federation, who laid flowers on behalf of all diplomatic missions in the country.

The concept of the Park fully reflects its name – every detail here "speaks" about the names of Uzbek people who have endured the tragedies and hardships of the harsh wartime. 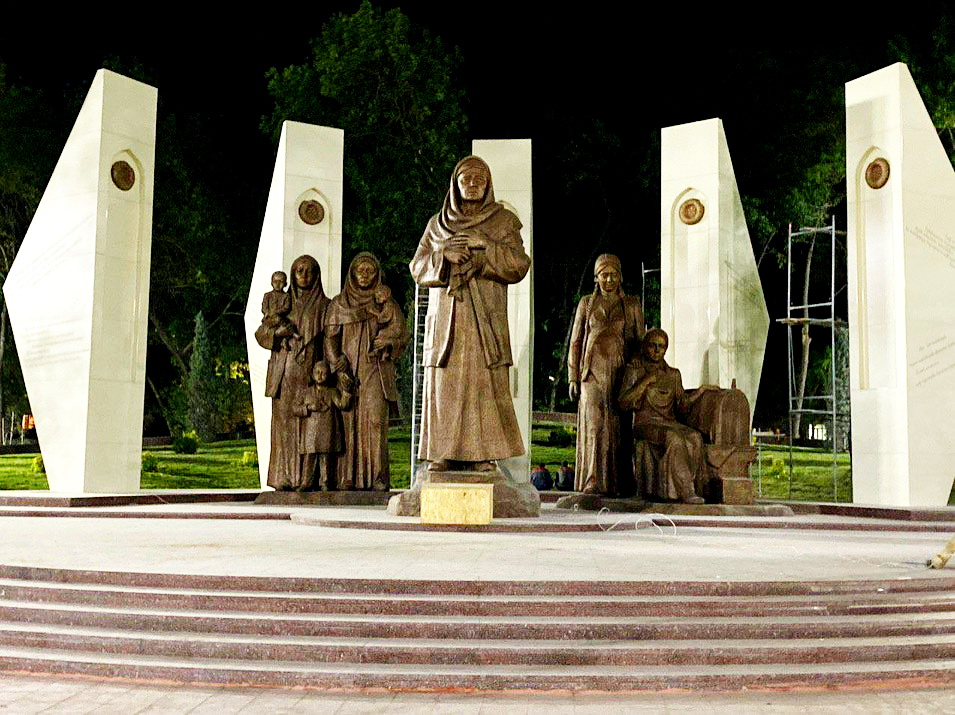 There are monuments to the Hero of the Soviet Union, General Sobir Rakhimov, and the memorial "Ode to perseverance" is dedicated to Zulfiya Zokirova, who lost five sons. The history of Zulfiya symbolically reflects the legacy of Uzbekistan women, all mothers who have experienced the pain of loss and found the strength to live on. Their inner strength is proof that the sacrifices of fathers and sons, husbands, and brothers who fought for a peaceful sky for the Motherland are not in vain.

A railway station with a moving train has been created on the park territory, reminding of the saying goodbye moment to relatives going to war. A moment that remained in the memory of millions of people, capturing the last joint memories and smiling images of very young, still full of life and hope people.

This place certainly deserves the attention of every resident and guest of Tashkent, and after the end of the pandemic, we will have the opportunity to touch the history of that time and get into its spirit. This is the history of the people and family.

In the Park's amphitheater, the President met with veterans to express gratitude for their feat. In total, in Uzbekistan 2020 we have 3,000 veterans and 70,000 workers in the reliable rear area, who gave the last to the front.

After sending 1,500,000 children to war, the Uzbek people sheltered the same number of refugees on their land. 300,000 orphaned children have found a new home and care in Uzbek families. The selfless feat of the blacksmith Shaakhmed Shamakhmudov and his wife Bakhri, who took in 15 children of different nationalities during the war, is deservedly depicted in the cinema, awards, and monuments.

Brave Uzbek soldiers defended the Brest fortress, Moscow and Leningrad, and took part in the battle of Stalingrad. 338 of them received the title of Heroes of The Soviet Union, 120 were awarded military orders and medals, 53 were presented to the order of Glory.

The selfless feat of the heroes of Uzbekistan deserves reverence and the bright memory of them will be carried through the centuries, and indissoluble, blood bond of generations.

The Dolores Travel team cordially congratulates veterans and their families on the 75th anniversary of the great date! Let nothing ever again disturb the peace and tranquility of the Earth!

Author of the photo: Kamil Enikeev