How the existing borders appeared

The first thing that strikes the eye when you look at the map of Uzbekistan is the bizarre and somehow different shape of its borders. This is especially obvious on the borders with Kyrgyzstan and Tajikistan. The reason for this we can find in the long and complicated history of this territory. While creating the borders of Uzbek SSR the authorities of the Soviet Union paid no attention to the ethical aspect. Then during the existence of Soviet Union borders of Uzbek SSR were constantly changing, some districts were added and some allocated, the political division was cut out again and again.
The last change of Uzbek SSR borders was made in the 1970s and since then their contours stay the same. As for today, Uzbekistan shares borders with 4 countries. The longest part of the border is the one with Kazakhstan, then goes Turkmenistan, then Kyrgyzstan and Tajikistan, and the smallest part is shared with Afghanistan. 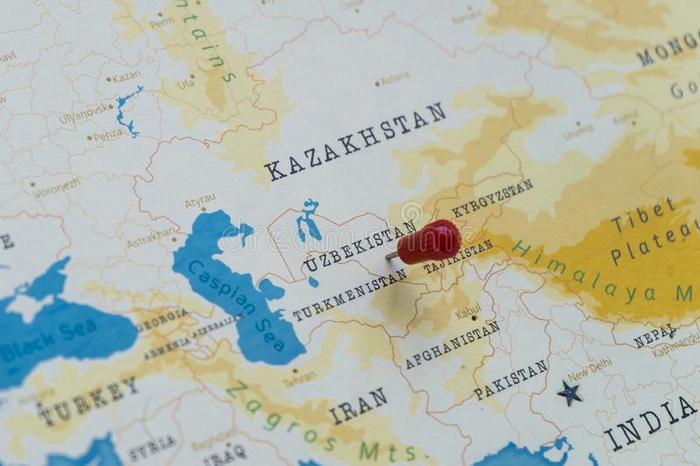 The subdivisions of the country

At the moment Uzbekistan consists of the following divisions:
1. twelve regions called “viloyati” which divide into districts (“tumans”) and cities of regional subordination. These regions are, for example, Samarqand viloyati, Xorazm viloyati, Namangan viloyati, Fergana viloyati etc,
2. one autonomous republic Karakalpakstan. In its turn, this republic also divides into districts and cities of republican subordination,
3. one independent city – Tashkent which consists of arrondissements (city districts).
The biggest part of Uzbekistan territory belongs to Karakalpakstan AR – almost 166 th. km2 from 447,4 th. km2 of the general territory of Uzbekistan (the country is big enough – almost like Sweden or Spain). What’s interesting here is that Samarqand viloyati with the territory ten times smaller than the territory of Karakalpakstan is a home for twice as much population. The reason is simple – the territory of Karakalpakstan is pretty much deserted.

The geography of today’s Uzbekistan

The biggest part of Uzbekistan territory (appr. 80%) comprises steppes, plains, and desert regions like Ustyurt plateau and Kyzyl Kum desert. They cover the north- and southeast of the country. However, Uzbekistan can boast the diverse topography, since the deserts pass on to the mountain ranges in the southwest with the peaks from 500 (Sultan Weese-Dag) till more than 4500 m high (Khazret Sultan). These mountain ranges hide the valleys and lowlands, the most fertile of which is Ferghana valley.

The life in Uzbekistan runs in localities which are situated in the valleys of two main rivers – the Syr Darya and the Amu Darya. These two rivers are watering the whole country. Talking about the water there is one more interesting fact. Uzbekistan is “a little” unlucky with the exit to the sea – it just doesn’t have one. Moreover, none of the surrounding countries has one. This is called the “doubly landlocked country” – the landlocked country surrounded by the same ones. However, Uzbeks cannot complain about the absence of different kinds of water reservoirs suitable for swimming. For example, Charvak reservoir – a big lake on the east of Uzbekistan is very likely to be the favorite place for summer recreation in Uzbekistan. Another example – the Aydar Lake which is located a bit far from the big cities and therefore provides the possibilities of more quiet vacation than Charvak Lake. And of course, there are a lot of small lakes in the mountains of Uzbekistan which are sometimes hard to find and reach but are totally worth it due to their clear cool water and total unity with nature.

The company «Dolores Travel Services» is your guide towards a cognitive, beautiful, and unforgettable tour through Central Asia.