When you go down from the Central Bazaar of Samarkand towards Shakhi Zinda, there is an amazing mosque on the right. Of course, from ancient times only the background remained and now it shines with new colorful glazed tiles yet not only of blue and white color as it is common in Samarkand but of various colors – yellow, red, ochre, light violet.

This is the mosque of Hazrat Khizr. Each self-respecting traveler should go inside this mosque, take the shoes off, sit on the carpets and listen to the prayer. After that the route will be lucky and secure as Khazrat the Prophet is a patron of all travelers and curious.

In Oriental fairy tales, in Persian and Arab mythology  Khazrat the Prophet is a favourite hero. He appears at the very moment when a traveler needs to help the most, he looks like an old man in green and white garments, smiling and calm. He always has vise advice or magic thing which he gives to desperate ones, and with this advice or thing the hero always wins evil or solves a difficult problem.

Scholars still don’t have a single opinion about the origin of Khazat Khizr legend. He looks like Elijah or hero of many other legends in different epics and cultures – Servants of the God, immortal, and helping out at the most desperate moments.

Thaumaturge who lives forever can come at any moment that is why hospitality is so developed in the East. Hazrat can come of any wealth and it is very important to roll out the red carpet. This is related to the evangelic saying of the Christ: “I came to you and you did not feed me.” 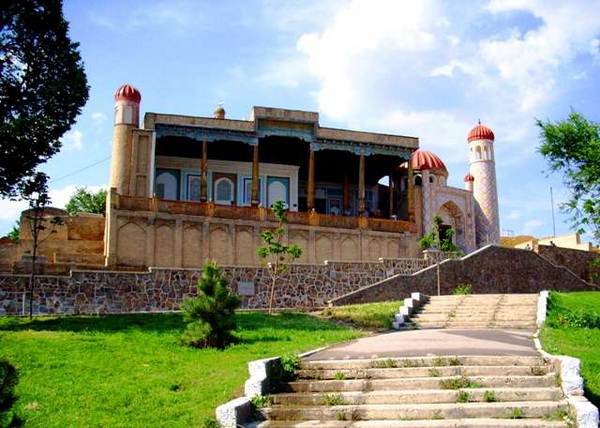 It is thought that the Prophet lacks thumb maniphalanx that is why in the East it is common to shake hands with both hands so that to know Khazrat. Why not?

Samarkand was traded city accepting caravans and the saint patronizing the caravanners and tradespeople who live in their journeys was a very important person. The mosque itself stands on the place where according to the legend the Saint was seen very often. In any case, Khazrat Khizr mosque has wonderful location – it is seen from the distance and from its balcony a great view of Samarkand opens.

On the balcony, there is an ancient column which used to hold the dome of the mosque. It was built on the place of a pagan temple in Muslim times and was later destroyed completely. The view we enjoy today was built in 1854 and was several times restored – in the last century and in the new millennium.

Probably, it is among those rare monuments which antiquity is not important at all. More important is the person in honor of whom this mosque was built.

And it is everlasting.